Donate today to help a family like River’s be together through the toughest battle of their lives.

If one of your children is threatened, if their life is on the line, you come together – you, your partner, your family.

You circle around them, hug them, protect them. You let them know that even though they’re frightened, even though it hurts, they’ll be okay. Because you’re all there, together . . . the people who love you the most.

And let’s face it, no medicine in the world can beat that.

Being hundreds of kilometres away while your child is alone facing the biggest fight of their life.

For too many families living in rural Australia, this is their only option when their loved ones are diagnosed with cancer. 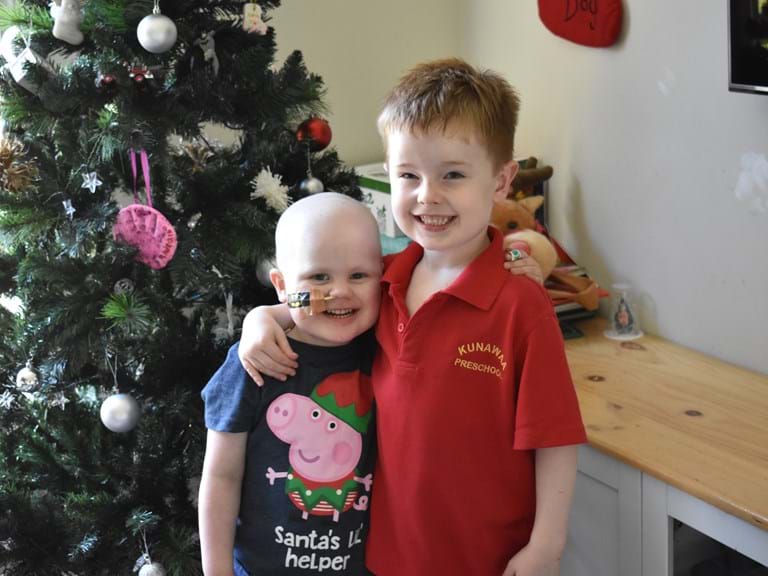 River with his older brother Nate.

Rebecca can still remember the day her life was turned upside down. It began with a visit to her doctor. River, her two-year-old son had stomach bloating that was not going away.

Even after taking the medication he’d been prescribed.

“You could see the veins coming through on his stomach. The GP took one look at him and said, ‘No, this is not right.’ He sent us in for an ultrasound scan straightaway. Two hours later we were told the ultrasound showed a 17cm mass near his kidney, and that he needed to be at The Royal Children’s Hospital.

The shock was awful. We got in the car and drove 350 kilometers straight to Melbourne. That was the 25th of May. We didn’t get to bring River home again till the 6th of November.”

How easily a family’s life can be turned upside down.

In a few short hours, the entire centre of their existence had been transferred from their home in Swan Hill to a hospital bed on a cancer ward in Melbourne.

And that’s why I want to ask you to donate to help fund our special home-away-from-home accommodation service today. Because it keeps families like Rebecca’s together during the nightmare of diagnoses and the months of treatment ahead. 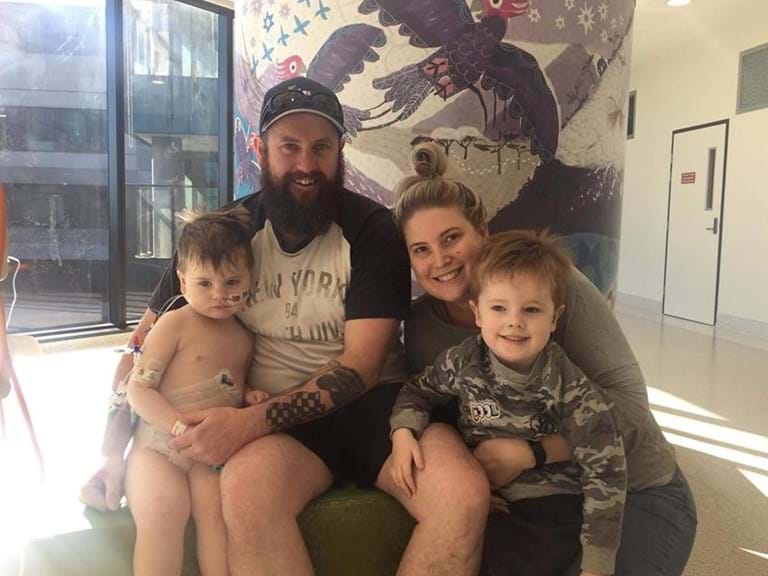 River and his family together while he received treatment. 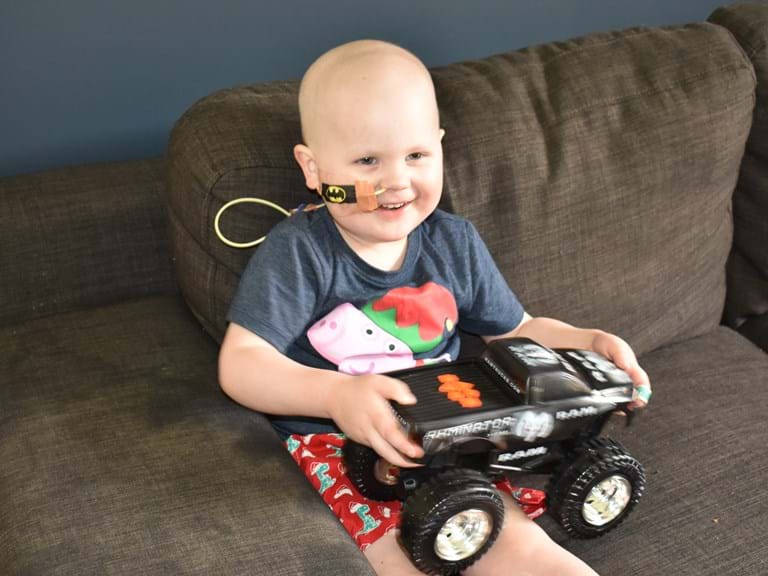 The next week was a blur of confusion for River’s parents, Rebecca and Nathan, as doctors fought to control River’s dangerously high blood pressure, while also trying to find an accurate diagnosis.

You see, it turned out that River had one of the rarest cancers there is.

It’s called adrenocortical carcinoma. And it’s so rare that over the last decade, The Royal Children’s Hospital have only treated two other cases.

“We were shocked at just how rare River’s cancer was. It was something like one in five million. You see things like that on the news, but you never imagine it’s going to happen to your own baby.

River had a nine hour operation to remove the tumour. That was the hardest day of our lives. We were waiting. Pacing. We were just hoping that we could bring River home. But there were times we didn’t know whether we ever would.”

I don’t know about you, but I choke up just reading Rebecca’s words. It breaks my heart to think of everything that brave little boy and his mum and dad were going through then.

But the biggest challenge for them as a family still lay ahead.

“After the surgery the oncologist came to us and said: ‘River’s going to have an intense course of 6 chemo sessions, each 21 days apart. And he can’t leave hospital until the treatment is finished.’ That’s when it hit us. We didn’t know what we were going to do.”

It suddenly dawned on Rebecca and Nathan that they were going to have to restructure their entire lives.

Home was 350 kilometres away in rural Swan Hill. Their older child, Nate was in pre-school there. He’d been staying with Rebecca’s mum and dad for the last week, but that couldn’t go on forever.

Nathan worked for a mining company 20 hours away in Western Australia.

They coped for a couple of weeks in shared accommodation with other hospital patients. River came back with them for one night after a chemo session, but Rebecca and Nathan were terrified of him catching an infection from one of the other families they were sharing bathrooms and kitchens with.

Desperate for a solution, they were a few hours away from saying yes to a short-term rental that was going to cost the family $3,000 a month – money they simply didn’t have. Then they got a call that changed everything . . .

"An apartment at Fight Cancer Foundation’s accommodation centre had just become available. We were so relieved. It was a short walk to the hospital, and we could move in right away. Everyone there was on the same journey, no one sick would be entering the building. It was just amazing. I don’t know what we’d have done without that apartment.”

The truth is these home-away-from-home apartments really are lifesavers for families like Rebecca’s.

We need your help to keep all three running.

Please will you donate today, to help other families like Rebecca’s be in exactly the right place while their child is fighting cancer – close by, and all together.

The difference it made to Rebecca’s family was massive.

Her mum and dad moved down with their son Nate straightaway. Suddenly they were a whole family once again. They could support each other in practical ways, like cooking and child minding. Plus giving the most important thing of all - hope.

For River, it meant mum and dad could be there at a moment’s notice. And River never had to be left alone while he battled through chemo.

At just two years old . . . weakened and nauseated by round after round of chemotherapy, a surgical wound in his side, tubes and wires everywhere, blood tests several times a day, all kinds of drugs to control his side effects, day after day of pain, discomfort and nausea.

He never needed his family around him more than he did then. And that’s the real magic of your donation today.

Please help to fund our home-away-from-home centres. These self-contained, fully furnished apartments mean more families can be where they should be while their child is fighting cancer – close by and all together. 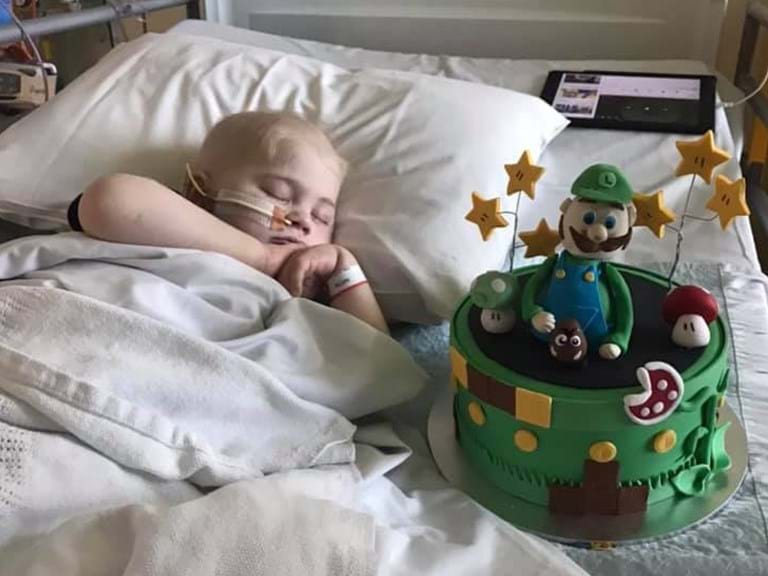 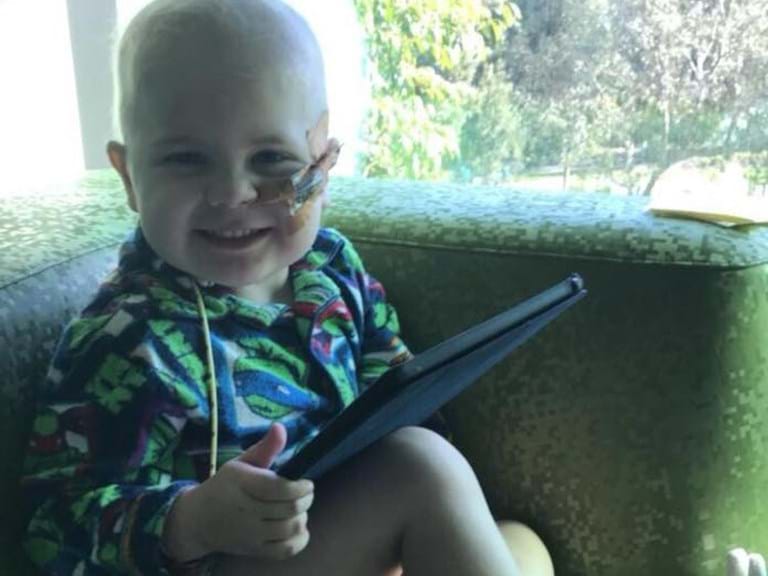 Thank you so much for everything you do to support Fight Cancer Foundation, and our life-changing work.